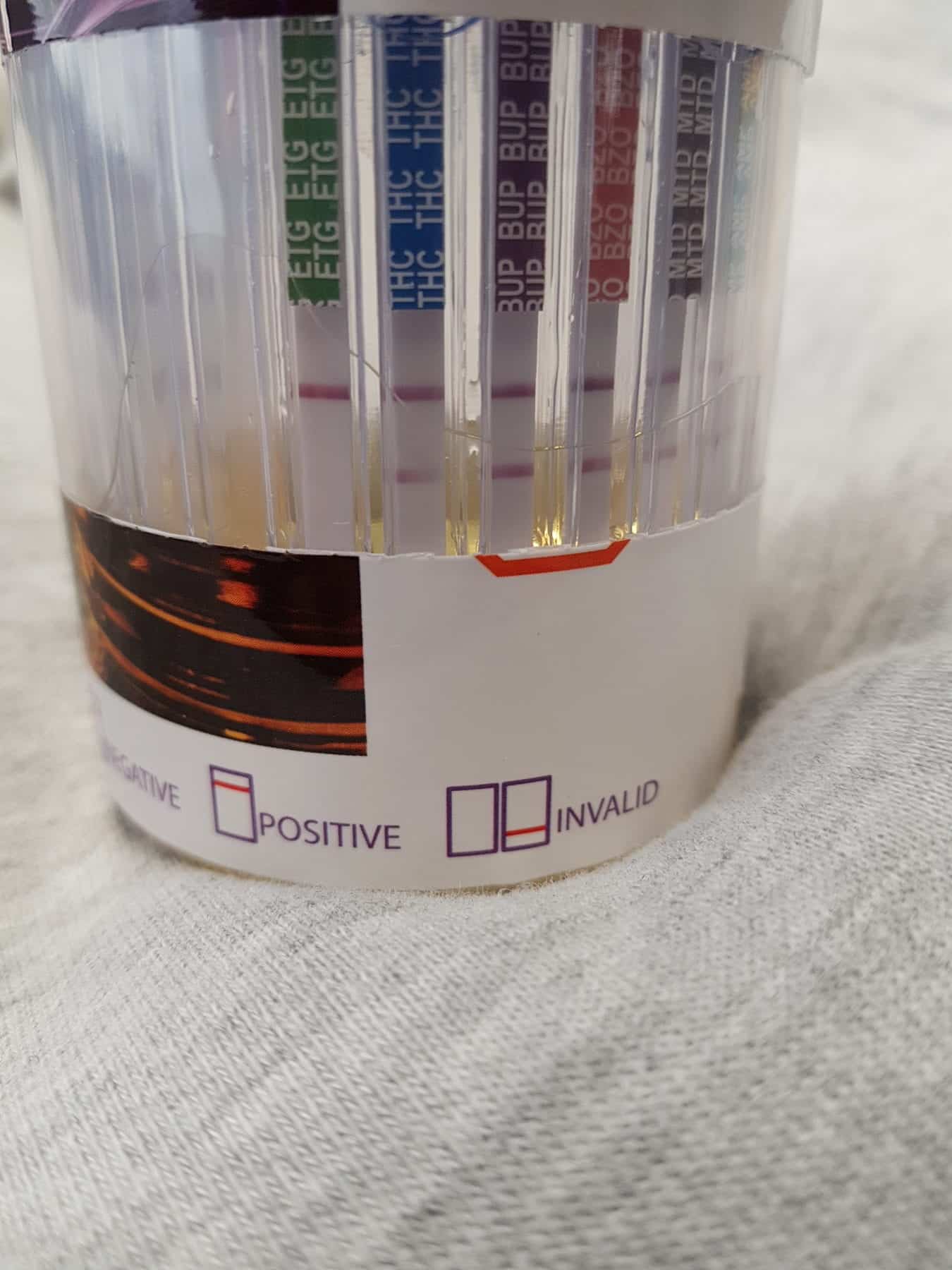 It is normal with drug testing devices that there will be false results sometimes due to either contamination of the sample, or close molecular chemical similarities to the drug being tested.

In most cases the result is actually NOT a false positive technically speaking, because the medication the person is already taking IS actually that drug! For example, a person might be taking a pain medication and then test positive for opiates. What they actually tested positive was for codeine, which is an opiate!

Many medicines you can purchase at your local chemist containing pseudo-ephedrine, ephedrine, or other sympathomimetic amines tend to interfere with urine screening tests and cause false positive results for amphetamines, but do not cause positive test results in the gas chromatography/mass spectrometric, or GC/MS, confirmation, thus pose no serious challenge in drugs-of-abuse testing.

In contrast, several prescription medicines containing opioids, amphetamines, or other ingredients can cause positive confirmed results in DOA testing. Eg Use of Marinol to control severe pain produces a positive confirmatory test for marijuana metabolite (11-nor-9-carboxy9 -tetrahydrocannabinol; THC-COOH) in urine.

It is important for an individual undergoing workplace drug testing to report the use of such prescription medication and name of the prescribing doctor so the Medical Review Officer can contact the doctor and verify medical use of such controlled substances. Otherwise, employment may be denied or other adverse action may be taken by the employer against that individual.

False positives in urine testing do happen from time to time, and must be followed up with pathology confirmation testing via gas chromatography/mass spectrometry (GC/MS). This will take away any chance of a false result.

One of the most popular stories is how poppy seeds tend to cause positive results for opium. Opiates are detected in drug tests by identifying morphine, and because morphine is made from the same plant as the poppy seed it produces a false positive to opiates.

This is a substantially higher safety issue than false positives, because a drug taker could deliberately fool the test and be at risk of hurting themselves or others. Unless the test is followed up by GC/MS, they could slip through the process and cause harm.

False negatives could also occur due to incorrect testing methods due to lack of training or faulty testing devices. The biggest cause of false readings is due to the sample being tampered with. The patient could water down their sample or use a commercially sold synthetic urine, etc. These tactics have been voided thanks to modern testing methods called adulteration testing.

Like urine, positive results have to be followed up with pathology confirmation testing in a lab. Again, this will take away any chance of a false result.

There are a few things that will cause a false positive in saliva testing. Prescription drugs such as pain killers that contain codeine or other opiates. Some antibiotics can trigger cocaine and opiates. Ventolin (Asthma medication) can set off the drug test for amphetamine. B-2 vitamin causes false positives for THC, etc. This is why the subject must let the collector know exactly what medications they are taking.

False negatives occur mostly when the subject has adulterated the test results. This can happen more easily with saliva drug testing. There are a lot of mouthwashes commercially sold that say it can beat a saliva drug test. Sometimes they can, and sometimes they can’t. Some people say vinegar rubbed on the tongue, or Listerine breath freshening strips just before the test… but that is immediately before the screen. The way around this is to make sure the subject has had nothing in their mouth for at least 10 minutes prior to the test.

In depth review of drugs that cause false positives

Drugs that may cause false positive to amphetamines include,

There is also a specific immunoassay which recognizes the presence of oxycodone in urine… but taking codeine or morphine containing analgesic medication produces positive opiate test results in drugs-of-abuse testing.

Be careful when eating a beagle, or a poppy seed roll! Poppy seeds is where morphine comes from, and morphine is the main calibrator in drug tests for opiates.

Drugs that may cause false positive to opiates include,

Although marijuana is a Schedule 1 drug, a synthetic tetrahydrocannabinol (Marinol) is used for treating nausea and vomiting in cancer patients undergoing chemotherapy and also as an appetite stimulant to patients with AIDS. Because Marinol is also converted into marijuana metabolite (THC-COOH), it causes positive marijuana tests; however, 9 -tetrahydrocannabivarin (THCV), which is a natural constituent of cannabis products, is not in Marinol.

THCV is metabolized by the human liver into THCV-COOH, and the presence of this metabolite (in addition to THC-COOH in urine) indicates abuse of marijuana rather than prescription use of Marinol.

Drugs that may cause false positive to cannabis include,

Benzodiazepine(Valium) is part of the AS4308 and is required to be tested in urine testing in Australia. Benzodiazepines is one class of the most frequently prescribed drugs in Australia, and these are used as tranquillisers, muscle relaxants, and anticonvulsants as well as to treat symptoms of anxiety.

More than 50 different types of benzodiazepines exist, but not all 50 drugs are available in Australia. The most commonly prescribed benzodiazepines in Australia are Valium, temazepam, alprazolam, lorazepam, and clonazepam. Other examples of derivatives in this class include areestazolam, halazepam, and quazepam.

Usually, immunoassay screening for benzodiazepines recognizes the presence of common drugs and metabolites after medical use or abuse. ElSohly, et al, analyzed benzodiazepines in 156 urine specimens from alleged victims of drug-facilitated sexual assault and observed that oxazepam was confirmed in 50% of the specimens followed by nor-diazepam (48%), temazepam (43%), and diazepam (40%), while the presence of alprazolam was confirmed in 21.8% specimens and lorazepam in 15.4% specimens.

Drugs that may cause false positive to benzodiazepines include,

Cocaine is used infrequently as a local anesthetic in ear, nose, and throat surgery, and also is administered topically during ophthalmitic procedures.

Positive drug testing results for cocaine (as benzoylecgonine, the major metabolite) may be encountered in subjects who have undergone such procedures. A patient may be positive up to 72 hours after an otolaryngologic procedure where cocaine is used as an anesthetic.

Cocaine metabolite can also be detected in the urine specimen of the physician who is performing the procedure.4 Jacobson, et al, studied the effect of use of ophthalmic solution containing cocaine on urine excretion of benzoylecgonine in patients. Out of 50 subjects studied, 47 subjects (94%) demonstrated a positive screening result for cocaine (as benzoylecgonine) four to six hours after receiving eye drops.

The authors conclude that ophthalmic administration of cocaine may cause positive test results up to two days after procedure.

Drugs that may cause false positive to cocaine include,

Novocain, although synthetically derived from cocaine, has a distinct structural difference from cocaine and the metabolite of cocaine (benzoylecgonine). Therefore, use of Novocain during dental procedures or use of other anesthetic agents, including benzocaine, tetracaine, and lidocaine, should not cause false-positive cocaine test results in urine DOA testing.

Both urine and saliva drug testing methods will have false positives/negatives from time to time, and in most cases will be the same for urine and saliva. Saliva tests seem to have more false negatives due to the ease of diluting or altering the sample against the person being tested. Also, saliva testing has been around for a while, but compared to urine testing, it’s still considered to be evolving. Urine testing is considered the gold standard.

Please contact me here if you have any questions or comments, and I will get back to you asap.