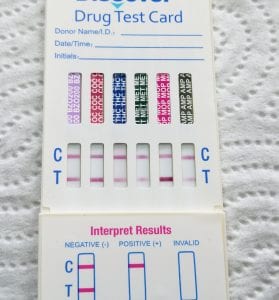 Cut Off Levels For Drug Tests

Here at Oz drug tests, we offer a great range of drug testing kits; saliva and urine. We are different than any other drug test supplier Australia being that we also supply american standard as well as Australian. American standard tests are much more mass produced, and hence cheaper, so we can pass the savings on to our customers.

This combination of drugs and cut off levels should be used when drug testing onsite, or where confirmation testing is needed. Cut off levels in the lab directly relate to the Australian standard instant drug test cut-offs.

Here is a picture of the urine drug test dip card after testing. As you can see this would be a negative result for all drugs. All lines are present in the test regions and control regions.

Notice the MET and AMP lines. They are naturally lighter due to Australian standards having a lower cut off level. American standards have AMP and MET cut off levels at 1000ng/ml, where here in Oz it’s only 300ng/ml. This means more than 3 times as strict as overseas drug tests.

The strips used in these dip cards are made from the same manufacturer as the One screen cup, which is certified to Australian standards AS4308. This means they have been verified to work within Australian standard cut off levels. These are the same drug tests you will find in pre-employment drug testing clinics… who we also supply.

We offer American standard urine drug tests as they are a more affordable solution as they are more mass produced. The second positive is they produce a more distinct line in the test region, meaning an easier to read test. Cut-offs in American standard are higher in some drugs causing lines to be more prominent.

Here are some examples of Oz cut off standards. Opiates in urine instant drug tests in the USA are detected at 2000ng/ml, wherein Australia, they’re at 300ng/ml. That’s about 7 times less! Amphetamines and methamphetamine are detected in the USA at 1000 ng/ml, where Australia is 300ng/ml. The remaining drugs are relatively the same as international standards such as THC 50ng/ml, Cocaine 300ng/ml, and Benzodiazepines 200ng/ml

Here we have the 5 panel dip card at work! As you can see this is a negative result as all lines are present in the Test and Control Regions. This test has USA cut-offs and are FDA cleared. Some customers actually prefer these cutoff levels as they produce a more defined line in the test region due to the higher cutoff, as you can see!